An imagined “Dear Paul” letter from Wings’ 1979 album Back To the Egg:

What did I do wrong ? Why do you hate me so much ? Why, as of this writing, have you extended the deluxe treatment to albums that are nowhere as good as I am like Pipes of Peace and Wild Life and not me ? Why don’t any of my songs ever get included in your live shows ? Why whenever anyone mentions me, are you so completely dismissive ? You once said I wasn’t so much a concept album as I was a bomb-cept album. Don’t you love me ? Did you ever ? Won’t you help me to understand.

Back To the Egg 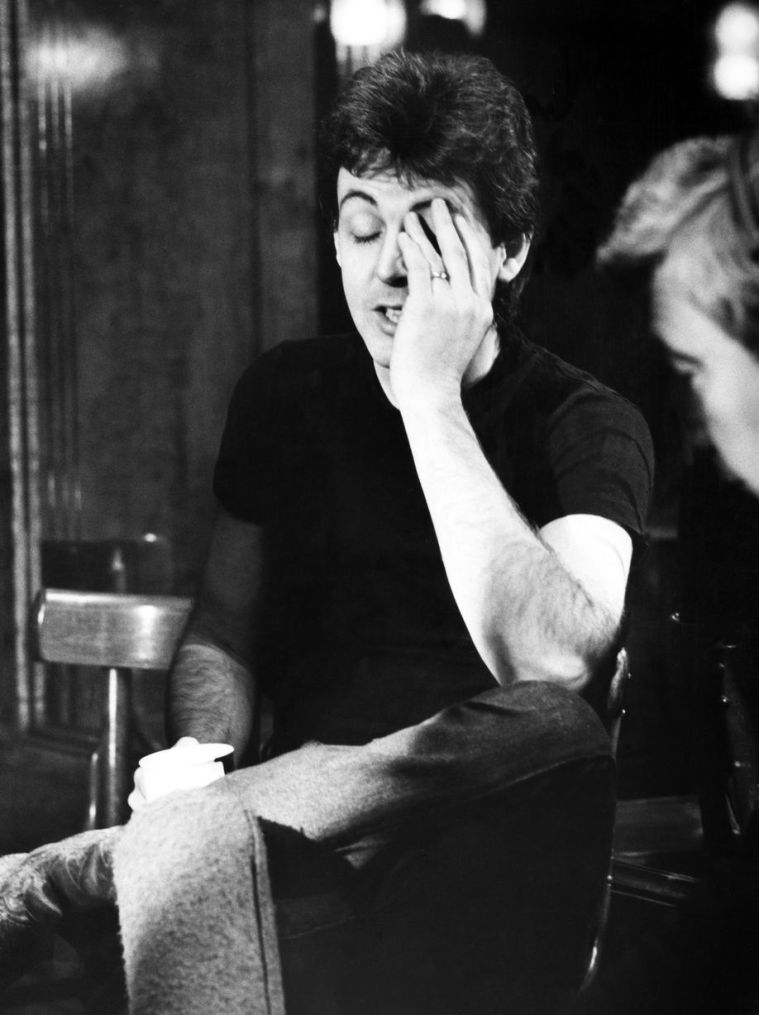 Background: It’s hard to pinpoint exactly when but at some point over the past 20 years music writers and critics began casting a considerably more benevolent eye toward Paul McCartney’s post-Beatle output than they’d offered up in the past. And if you were a fan who’d experienced any of Paul’s solo and Wings stuff being released in real time it was impossible not to notice this seismic shift in opinion. I remember going to buy Pipes of Peace on release day and the guy behind the counter sweetly telling me it was “shit” as I handed over my money to buy it ( admittedly not Paul’s finest album but still). For years writers, record clerks, even other musicians all seemed to be equipped with the same default button, the one that was stuck on Paul solo sucks.

But time has been exceptionally kind to the output of post-Beatle Paul and the seemingly ingrained perceptions have changed. Maybe because the context and expectations have been removed and the albums can finally be listened to at face value. And certainly the ongoing Paul McCartney Archive Collection deluxe reissue program with it’s wondrous, remastered, dolled up versions of selected catalogue titles has helped open ears and eyes. Or maybe, cynically, the awareness that Paul’s a senior citizen and we should appreciate him while he’s still here has come into play. Whatever it is, Paul’s post-Beatle albums are gradually getting their deserved due. Albums once considered substandard and sloppy have come to be regarded as masterpieces (1971’s magnificent Ram). 1980’s McCartney II, described cruelly in the Rolling Stone magazine review upon release as “aural doodles designed for the amusement of very young children” is now rightfully acknowledged for it’s prescience and originality. And time has also shone kindly on the glorious, sugared-up pop of Red Rose Speedway (1973) and Venus & Mars (1975) after years of their being written off as subpar radio pandering cheese.

But alas, this deserved reassessment and acknowledgement hasn’t extended to quite all of the children. I’m speaking specifically of 1979’s Back to the Egg. It’s especially grating in light of the belated love that’s been directed at lesser lights ( okay, gonna say it… I think 1989’s Flowers in the Dirt is supremely overrated). Egg remains a true full length stepchild in the McCartney canon. No deluxe Archive treatment ( despite rumors). No anniversary celebrations. No love at live shows. Egg gets zero.

And here’s the thing, amongst many of the hardcore Macca fans and music nerds I’ve spoken to over the years, the general consensus seems to be that Back To The Egg is objectively brilliant. A loud, beautiful, blaring down the highway, mess of an album and the most criminally underrated release of Paul’s post-Beatle career: the catalogue’s true sleeper. Everyone, can I get a SALAMANDER ( that’s a reference expressly inserted for you Macca nerds. To everyone else I apologize ).

And now as a quick reminder of what we’re dealing with from a historical perspective, here are some highlights from the late Timothy White’s original Rolling Stone review of 1979’s Back To The Egg aka the last official release of Paul McCartney’s post-Beatle band Wings:

“This album is nothing more than a slipshod demo by an aimless band. If it had arrived unsolicited in the offices of Columbia, it would have been returned in the next mail with a terse “No thank you.”
I can think of few other prominent rock musicians who’d have signed their names to this kind of drivel. McCartney’s gross indulgence is matched only by his shameless indolence, and Back to the Egg represents the public disintegration of a consistently disappointing talent…Back to the Egg is just about the sorriest grab bag of dreck in recent memory.”

Damn. Timothy White really hated Back To The Egg.

If a Tree Falls: What does it mean when an artist passively denies an album’s existence by simply ignoring it ? Besides the one above, the reviews for Egg upon release were across the board savage, full of exceptionally hyperbolic vitriol and personal attacks. Why was the hostility ratcheted up so high when it came to Egg in particular ? While it may not have been the equal of what was considered to be Macca’s most esteemed post-Beatle album at that time Band On The Run, it wasn’t that bad ( and to my then young teen ears it was amazing with a giant A). What did they want from him ?

That’s a trick question. They wanted nothing. To them he’d had his ration of success and acclaim ( understatement) and had stopped trying. They thought he was complacent. He was 37 years old and to them his attempts to seem sonically modern and tough came over as desperate, especially in light of all the soon to be seminal albums sprouting up around him as of 1979 (by the likes of The Specials, The Clash, XTC and Joy Division in particular). They wanted him to get out of the way.

‘Cos I Got a Whole Lotta Love For You: The most pronounced quality of Back To the Egg was it’s noticeable increase in volume in comparison to all previous Macca releases. Egg was, for all intents and purposes, a hard rock record… but it’s much more fun to think of it as PAUL’S F-ING METAL ALBUM 🤘. Roughly 6 of it’s 12 musical tracks tug aggressively ( yet sweetly) on Satan’s hem, drunkenly bouncing off the walls with loads of fat riffs, sludgy chords and throat shredding vocal performances. With the exception of “Helter Skelter” Egg remains as metal as Paul has ever been. Representing the noise are “Spin It On”, “Old Siam, Sir”, “Rockestra Theme”, “So Glad To See You Here”,”To You” and “Getting Closer”, every single one being some manner of infectious and sloppy drunk on itself. For those songs as well the album’s ballads, the Paul vocal switch is set to full throttle.

“Getting Closer”, the album’s highest charting single still kicks all kinds of ass.

The Soft Stuff: A cryptic and eerie hymn (“We’re Open Tonight”), a gothic and doomy ballad ( “Winter Rose”) and the requisite Macca unabashed tribute to love (“Love Awake”) supremely fill in the spaces between the noise. In addition there’s a quality singalong written and sung by band member Denny Laine (“Again and Again and Again”) as well as some straight up romantic retro kitsch because Paul can’t help himself (“Baby’s Request”). And “The Broadcast”, wherein Paul has the owner of the castle the album was recorded at recite a pair of obscure book excerpts, adds a bit of perfect pretentious weirdness to the proceedings.

And oh yeah, Egg is also home to arguably one of the all time greatest McCartney songs ever ever ever, sublimely melodic lament and deep catalog dark horse “Arrow Through Me” which can never be exulted and appreciated enough. It’s hook is just…I have no words.

The song has developed a bit of a cult following over the years, the finest manifestation of which came in the form of Erykah Badu’s “Gone Baby, Don’t Be Long” from 2010.

What If It Happened To You ?: Bad reviews dovetailed into disappointing sales (compared to all the previous post-Beatle releases that is, as Paul himself commented not long after, Egg’s sales would’ve been considered quite healthy by a “normal” band’s standards). And, maybe unsurprisingly, Paul seemed to start distancing himself from it. When asked about it later he’d said at the time of recording he’d been feeling bored and restless working within a band set-up, implying that this ennui affected it’s overall quality…but that may be a bit revisionist analysis so as to align with the myriad of mediocre reviews. Maybe all that negativity got to him. Which is a damn shame because there are a whole lotta people who don’t agree and think the critical assessments were just plain wrong, who continue to believe Back to the Egg rocks and rules in equal measure all day and all of the night.

Loud, lyrically cartoonish, overtly romantic, fabulously weird, occasionally somber and all the while innately melodic, Back To The Egg remains a confusedly beautiful piece of noise. Bless it forever.

P.S. A special nod of appreciation to the Wings logo light fixtures on the album cover. I will never stop wanting you.

Listen to Back To The Egg right here: