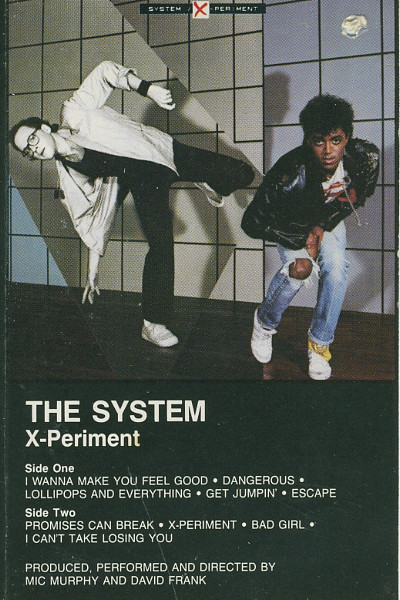 I was working my very first summer job at the “One Hour Photo Lab” wearing a blue lab coat the first time I heard the System. Just doing my ordinary shift, mixing a huge vat of film developing chemicals (not fun), with the radio on when “Promises Can Break”, their new single off the X-Periment album came bursting out of the junky boombox we had there. The song was soul, yeah, but it was fueled by a fat synth, so it sounded kind of different, modern. It also featured a dizzying hook and downright swoon-worthy ascending vocal line. I was instantly in love. I went and bought the album from which it came, X-Periment, the very next day and discovered that track was the tip of the iceberg and that the whole thing was full of tunes with lush electronic heartbeats and every one sounded like a single.

The band itself consisted of David Frank and  Mic Murphy w/assistance from Paul Pesco and their singular, hard-earned moment in the sun came with their 4th album, Don’t Disturb This Groove whose title track was a mega-hit and is still justifiably beloved today (with over 2 million Spotify plays and counting, not bad). Now while that album is pretty fine, the bands charms and gifts shine the brightest on the aforementioned X-Periment, and it’s follow-up The Pleasure Seekers. Both feature plush, melodic, electro-soul pop of the highest order, all melodic, edgy, anxious and emotional, and are absolutely worth seeking out. And with that let’s raise a glass to these guys, the true pioneers of electro-soul, they still deserve a lotta love and all of our ears.

Have a listen/look at these sweet things:

And here are the X-Periment  and The Pleasure Seekers albums on Spotify if you wanna go deeper: