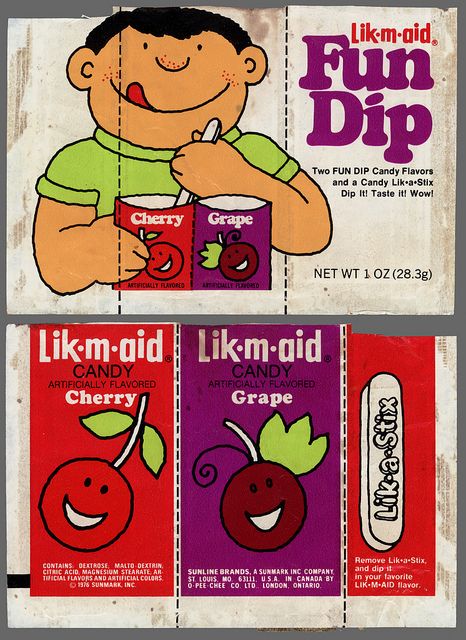 They just don’t make truly disgusting candy like Lik-m-aid anymore ( pronounced “lickamaid”). I’m not talking about the taste, I’m referring to the means by which you actually ate this stuff. It came packaged in 3 fold out parts. There were 2 pouches of “fruit” flavored sugar (and I do mean sugar, it was literally colored powder in each pouch) and a single pouch containing a candy stick with which to eat the powder. How do you get tiny grains of sugar to stay on a thin stick with no spoon at the end to catch them ? That’s right : you lick it. Your saliva acts as the disgusting natural adhesive get the fruity powder into your mouth. Absolutely disgusting yes … yet completely wonderful and mesmerizing in it’s grossness… and know what, I’d willingly ingest every pouch now if I could…anyway, here is some glorious new music : Welcome to the Weekly New Wonders Playlist, the latest in  #1 songs from an alternate universe. I feel the same way about these songs as that kid on the package does about his Lik-m-aid: “Taste It ! Wow!”.

You can listen on Soundcloud or Spotify right here:

I first became aware of the Pretenders “Pack It Up” through Jawbreaker. Now I had probably heard the Pretenders version already, at least spilling out from under the bedroom door of an older sibling in the 80’s (mine were cool), but “Pack It Up” wasn’t one of the radio singles so I didn’t become truly acquainted with the song until Jawbreaker sort of covered it. It was on their “Chesterfield King” EP which I bought from the band at their merch table after a show at ABC No Rio in the the dawn of the 90’s. I then spent the rest of the night and following day trying not to bend the record as I stayed up wandering NYC before heading back home upstate. I say that Jawbreaker only sort of covered “Pack It Up” because in place of the original lyrics, they sang the words “don’t play…” followed by a list of their own song titles. At this point in time I didn’t know the original lyrics, but I saw the songwriting credited to “Chrissie Hynde”, which seemed odd as Jawbreaker were tiny then and she probably wasn’t writing her songs about their songs.

Skip ahead several years and I live in Oakland and am working as a bike messenger in San Francisco. On the weekend my friend Dominic and I would go to Amoeba Records in Berkeley and sift through the used vinyl. It was the mid-late 90’s and at this point in time people were busy buying cds and jettisoning vinyl collections so it was easy to snap up entire artist’s catalogue for 99 cents per LP. I bought all kinds of great stuff this way : most of Springsteen, CCR, Byrds, Waylon Jennings, Emmylou Harris and… The Pretenders. This is how I ultimately closed the loop and solved the riddle of just what the hell “Pack it Up” actually was: a track on side 2 of “Pretenders II” from 1981, a “deep cut”. For me though, it is the zenith of the album.

It begins with a great mid-tempo chorus riff and just seconds into it, Chrissie Hynde belts “You guys are the PITS OF THE WORLD !”. Whoever the “guys” are have already been leveled, and she hasn’t even started to sing yet…guns are blazing. She then claims “this is no place for me…” and begins to indict a person or perhaps a series of people, seemingly men, seemingly lovers, but it could really be anyone who is crappy with their influence or authority. They are of the party/industry set with all the usual trappings : jacuzzis, suntans, Porsches. Perhaps record executives luring artists into bad deals with fake promises ?

She ends the first verse by fuming “But I know my place…where’s my suitcase?”, then the chorus hits and she rails “Pack it up or throw it away, what I can’t carry, BURY !”. This gets me to the core of my own motion-loving soul.

I love travel, touring, and nomaderie of all kinds and under strife my instincts usually try to point me out the door and away from whatever is getting under my skin. In real life I don’t do this nearly as much as I want to, still the temptation to “pack it up” is strong sometimes.

If this was the whole song I would still love it but what really gets me is that she goes on to claim a portion of dignity while packing her meager scraps and stomping out : “When you pass me in your Porsche, please don’t offer me a ride, I may be a skunk, but YOU’RE a piece of junk!”. Then she says “And furthermore…”and reads off litany of ills starting small with “I don’t like your trousers” and zooming out to “all you scumbags around the world, you’re the pits of the world!”. And with that the song comes full circle, the narrator has left, and a smoldering crater is all that remains. Here is the recognition that you may just be a dirtbag rock n’ roll urchin, but you can still claim dignity and agency. You can still pack it up.

It is stiflingly hot and humid in NYC right now, the kind of heat where you are grateful for even the slightest hint of a breeze. Thankfully Madlovely have gifted us with an exceptional bit of dubby, hazy and slightly desperate hip hop soul pop to soundtrack that feeling of walking and breathing in the absolutely solid night air. “Thirsty” is a sticky groove that includes a lyrical tribute to goddess Chaka Khan’s version of “I Feel For You”, and sounds like some otherworldly imaginary duet between T-Boz and the late Prince Be of P.M. Dawn, which is to say it’s kind of perfect.

The glue that holds “Waste” together is empty space: it’s a vast, melodic ambient pause. It brought to mind the wonderful Julianna Barwick in it’s hypnotic, spareness, it’s stops and starts and suspended animation, but is even more intimate than the best of her work. Ineffably pretty and epic.

Okay, this is beautiful, and it’s difficult not to instantly fall under it’s hazy, wistful, summer spell, which is to say it’s about as infectious as any windblown acoustic ballad has a right to be. “I walk in the breeze like I am seventeen, love is mostly war and love what is it for ” goes the meandering chorus, exuding both optimism and world weary cynicism and yeah, it’s beautiful. “Seventeen” is featured on Tomberlin’s forthcoming debut album,”At Weddings” to be released in August via Saddle Creek and while we’re here, gonna attach the video below which, gotta say, perfectly captures the mood.

I ate more of these TV dinners as a child than I care to mention and honestly this “Entree” still looks good to me… but this has nothing to do with anything, as in I was looking for this weeks header photo and a random memory surfaced and so there you go. Anyway, I’m sorry and here’s the Weekly New Wonders Playlist featuring the best new music and damn there’s a lot of it. You can listen on Soundcloud or Spotify but please note lists are slightly different due to certain tunes not being available in both places, and so if you are up for it check out both. And God bless those soggy fries, I swear they totally ruled.